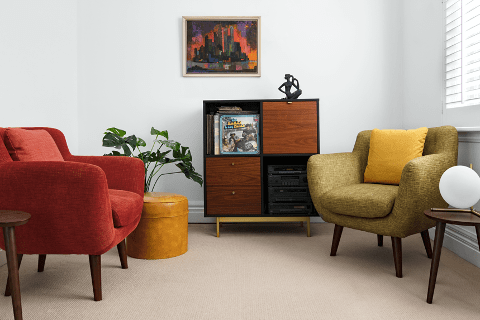 However, MCM is a movement in its own right, that is specific to the United States. Generally, furniture from around the world produced at this time (1945-1969) is referred to as MCM but the style was defined in the USA.

Like Scandinavian interior design style, MCM is characterised by simplicity, clean lines, a lack of decorative embellishments, authenticity in materiality and colour (see The Basics About Scandinavian Interior Design for details).

You’re more familiar with mid-century modern style thank you think as I’m sure you’re aware of prominent designers of the time such as Eames, Knoll, Le Corbusier, and Noguchi.

All of these pieces feature the hallmarks of mid-century modern interior design style such as clean lines. Especially in the Noguchi coffee table and the Barcelona chair, which both feature an L shaped or angular foundation. Both also offer simplicity in materiality such as leather or wood and glass. And all marry masculine and feminine elements with success for example the Eames chair is large in shape but the curved lines soften this piece and complements the masculine colours and materials such as black and wood.

Colour is also synonymous with mid-century modern design style. Colours such as orange, yellow, blue, green (olive) feature heavily in the textiles, crockery, even wallpapers and art of the period.  I think these are happy colours and popular because they were an antidote to the bleakness of WWII.

The mid-century modern interior design style is marked by materials such as timber, concrete (refer to Brutalism) and plastic and manufacturing.  Which meant for the first time that ‘designer’ pieces could be mass produced and widely available to more consumers. Previous interior design movements did not have the benefit of mass production. In Australia we had our own MCM design heroes such as Grant Featherston who gave us the Featherston chair and with replica furniture stores selling these classic designs in abundance mid-century modern interior design remains part of the design conversation in the 21st century.

We love working with this style for clients, especially mixing original pieces of the time with new pieces that celebrate all that is great about MCM.  However, we use replicas sparingly for two reasons; firstly, they’re not a unique way to communicate your design story and secondly, because the manufacturing of this pieces is en-masse means the quality is comprised, which is the opposite to the original design value of these iconic designs and of craftmanship they represent.