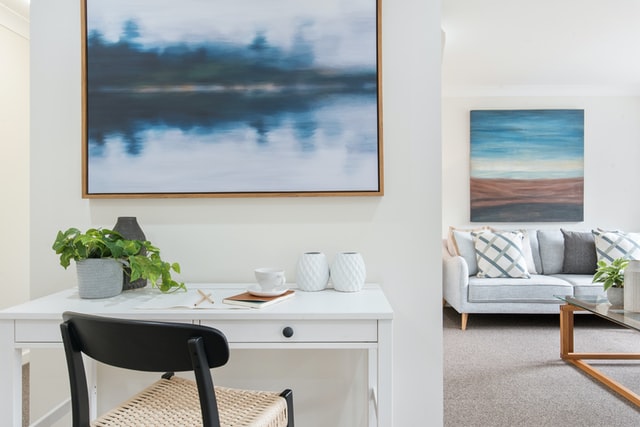 The beach house is a dream many Australians have.  An idyllic home away from home, somewhere to go to for a quick escape at the weekend or a longer relaxing break during the Christmas or school holidays.

There are many variations to the Australian Coastal Interior Design aesthetic, built on the foundations of what coastal interior design aims to achieve, such as; a neutral colour scheme, the use of natural materials such as wood and rattan, plenty of natural fibres and textures such as linen, cotton, simple but striking patterns such as stripes or checks.

Modern Coastal Interior Design takes its essence from Modernism, with various adjustments to communicate a coastal aesthetic.  So you will see clean horizontal lines, uncluttered spaces that unveil a vast volume of space, neutral colour and highly functional.  Highly functional lends itself well to seamless indoor outdoor living which is quintessentially Australian.

Colour schemes for coastal styles seem to focus on the colours found by the beach. Such as blues, greens, whites, beiges and yellows.  Variations exist in tone where you might have a navy blue rather than a pastel blue.  I have seen coastal interior design colour schemes include other colours such as black and pink. Which also work well and add a point of difference to the space.

It’s important to remember that The Hamptons is actually a region in the state of New York in America.  Therefore, this style has different influences as it is founded in a country that was once a colony.  America has Spanish, British and French influences. Some of the design elements from these countries are represented in Hamptons style. Which is a classic, elegant and sophisticated style.

Hamptons style is almost the opposite of Modern Coastal interior design which is more relaxed.

Furniture in Hamptons interior design is larger in proportion, a way for the Empire to communicate wealth and stature. In The Hamptons a beach house is the preserve of the rich and wealthy.

Cabinetry has a classic Shaker style profile, handles are ornate, and drapery is luxurious. Textures natural but the patterns maybe more formal.  You could also add a metallic accent such as gold, brass or chrome to elevate the space.

The colours in a Hampton interior designed space could include dramatic black or traditional duck egg.  The space is symmetrical and balanced and the beach décor is positioned carefully and not strewn around casually.

Hamptons spaces can lack personality due to their formality. Which is why a sense of your own style or story should injected into the space. You can add your own personality tthrough art. Ensuring your Hamptons interior styled space is welcoming and relaxed as a beach space should be.

Receive 75 powerful interior styling tips to beautify your home and a new buyable inspo board direct to your inbox each week.